The sea surged through several seaside homes in northern Buller this morning when a 3.5m high tide hit at the same time as severe wind gusts.The Buller Emergency Operations Centre was activated at about midday.
Buller Mayor Jamie Cleine was surveying damage at Mōkihinui with Civil Defence controller Sean Judd and West Coast Emergency Management staff when he spoke to The News.“There’s been mainly issues with coastal wave action into the backs of houses at Granity, Ngakawau and pretty solid erosion of the first seawall at Mōkihinui.” There was concern about the next high tide at 9.45 tonight, Mr Cleine said. He was expecting advice on whether evacuations from coastal areas were necessary.
Wild waves also pushed debris across the road, forcing Waka Kotahi/NZ Transport Agency (NZTA) to close the road between Granity and Mōkihinui about 9am. NZTA maintenance contract manager Moira Whinham said the road itself was not damaged.“We have crews there working to clear the road. We are still to complete inspections north of Granity.” The road reopened with a flooding caution in the early afternoon but will close from 8.30 to 11pm for tonight’s high tide.Mr Cleine said he had also had reports of some scouring on the temporary stopbank built at Snodgrass Road during February’s severe weather events. 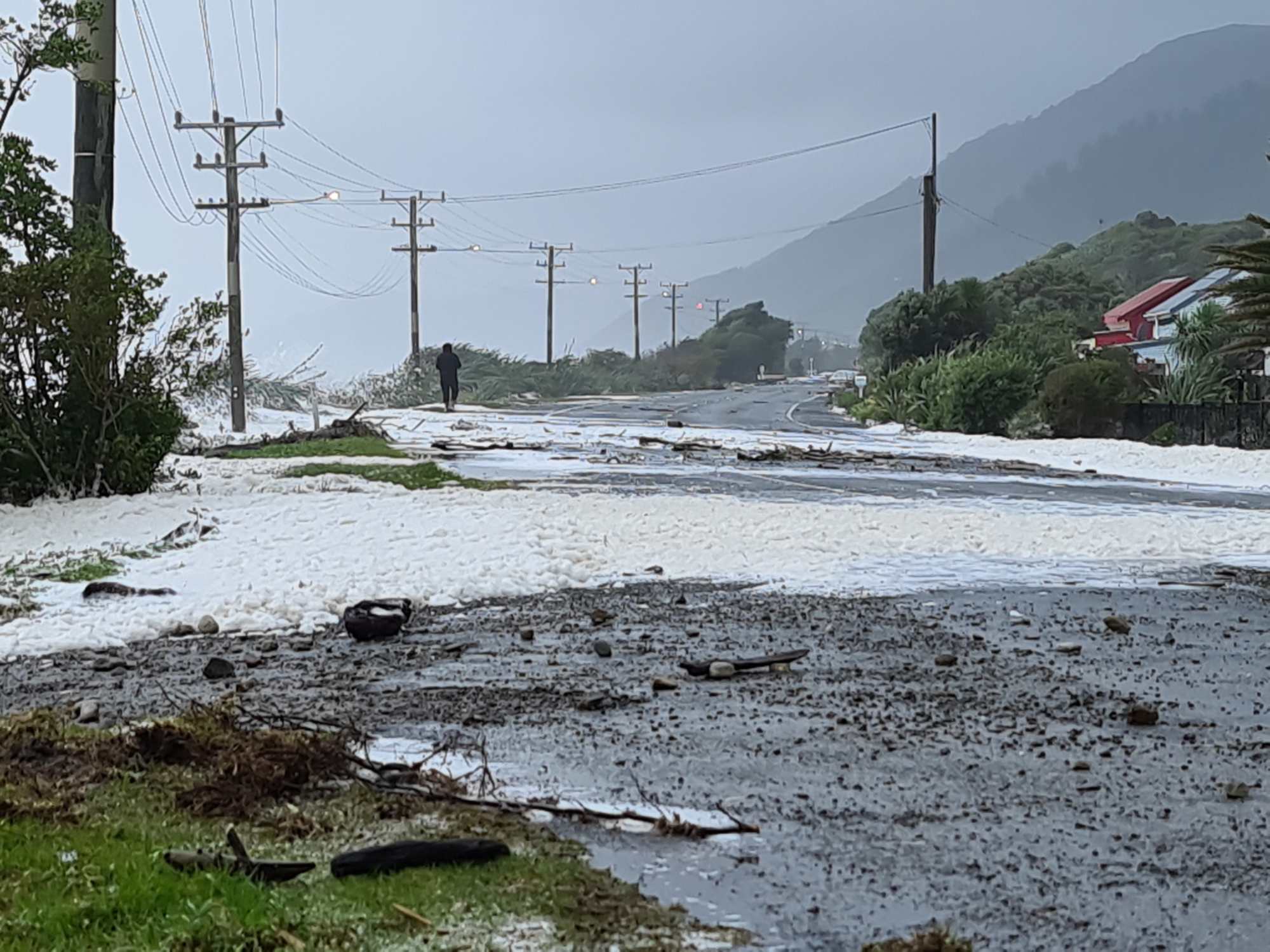 The sea pushed debris across the road at Ngakawau this morning. Photo: supplied

The Carters Beach bund held up to wild seas at high tide this morning. Carters Beach photographer Jules Anderson said the weather had been “very scary”. “There are lots of debris washed up but that could be a good thing to build up the beach towards the bund. The bund hasn’t really been tested so it’s good that it’s working.” The strongest wind gust from the storm was 111km/h measured between 4am and 5am today. It was the strongest gust this year. Westport Airport closed this morning after strong winds blew down part of the apron fence and Sounds Air grounded flights in and out. Roads across the region were also battered by strong winds, angry seas, thunderstorms with heavy rain squalls and isolated areas of hail over the weekend and into this morning. Snow down to 800m closed both Lewis Pass and Arthur’s Pass overnight and several other roads closed due to slips, or flooding.
Lewis Pass reopened at 8am today and Arthur’s Pass reopened at about 11.30am. A slip closed the Upper Buller Gorge Road over the weekend. The road between Inangahua and Murchison is expected to remain closed until at least tomorrow.
Westport fire chief Alan Kennedy said the fire brigade had five callouts over the weekend. Apart from a fire alarm with a flat battery and a faulty light fitting in the RSA the rest were storm related, he said. This included a house on Fonblanque Street with a blown-out window, trees down on Wakefield Street and arcing power lines on Wilsons Lead Road. This morning the brigade was called to a house on Palmerston Street with flapping roof iron. Buller District Council infrastructure delivery manager Eric de Boer said trees came down across Napier Street in Millerton on Friday. There were no other issues reported over the weekend. A few minor issues were reported this morning – but nothing that closed any council-managed roads. This included small slips and branches on the Karamea Highway, trees cleared from Nine Mile Road, a tree across one lane of the Millerton Track, minor flooding on Westbank and Palmers roads near Springs Junction.
NZTA has a warning in place for possible sea flooding and debris on SH67 between Westport and Greymouth.